While working as a translator for the a British spy agency, Katherine Gun leaked a government memo to the press. In doing so, she violated the country’s Official Secrets Act. The memo detailed a request for damaging information the UK and US wanted to use as leverage with UN Security Council members reluctant to vote for the 2003 Iraq war. “Official Secrets,”a movie documenting the case, opens today. Speaking to Entertainment Weekly, Knightly said they looked to the film “All the President’s Men” for inspiration. It shows, in a good way. While one of the more tense moments in that Watergate film involves a confusing phone conversation, in this one, drama emerges from a spell check error.

Below find comment from some of the players and reviews of the film.

Katherine Gun recalls her reaction to the memo in a Q&A with Salon:

This was literally right before Colin Powell’s speech at the UN [alleging that Saddam Hussein had weapons of mass destruction]. I got an email on the 31st of January, it was a Friday. The email was basically forwarded down to a whole group of analysts, and that was approximately 100 people or so, and I happened to be one of them. So it was an email from a guy called Frank Koza, he was the head of regional targets at NSA. It was basically a request from the NSA to GCHQ, it just said, “We want all the information you can gather on the personal or the domestic or office communications of the six delegates that were sitting on the UN Security Council, the swing nations.”…They wanted any information on these diplomats, and it said specifically, this is a quote, “the whole gamut of information that would give U.S. policymakers an edge in achieving goals favorable to the U.S.” So I was just stunned by this, you know? I was appalled and I was shocked.

Gun “wasn’t exposing absolutely everything she knew. She was exposing one illegal act that she felt was important enough to put her career and her life on the life [for], but it was a very specific act. She wasn’t putting field agents in danger. I understand the necessity for secrecy within intelligence services. But equally on the other side, what is the point of democracy if we hold our judicial systems up and yet the people in power are not following the laws? How do we hold people accountable? And what are our democracies worth if the people in charge are not held legally accountable? 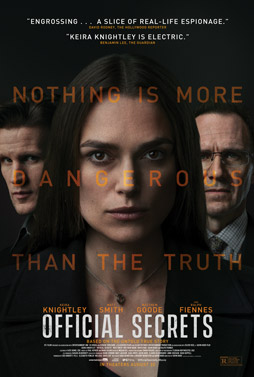 What drew me to the film was the fact that Katharine Gun, especially when I met her, wasn’t some high-ranking political fig

ure or superstar of the intelligence world, she was actually quite ordinary. I’ve said this before and she’s not offended; she says the same thing. She’s not a classical hero although I think she is a hero. She’s an ordinary person who came across something at work that didn’t smell right. The question is: do you risk losing your job to say so. In her case, not only did she risk losing her job but also her freedom. So, I thought this was an extraordinary story about an ordinary person who happened to be placed in a “big world” context.

A model of professionalism and energy, “Official Secrets” moves along at a brisk clip. It’s paced like a police procedural, but it focus es not on an investigator but rather a moral exemplar who takes a principled stand in defiance of the price that has to be paid.

Already twice nominated for an Oscar, Knightley gives one of her strongest performances here, using her innate steeliness and presence to create a convincing portrait of a courageous zealot who believes in right and wrong in an almost biblical sense.

If it sounds a little dry as cinematic material, think again. Hood has a knack, like Hitchcock, for making such premises into white-knuckle thrillers and — like he did in Eye in the Sky — he has done again here, aided by a terrific cast led by a never-better Knightley in the key role of Gun.

More Iraq War whistleblower drama comes in November with “The Report,” a movie about CIA torture.